Venice is an incredible “must see” city, but Italy is full of “must see places”, we generally suggest you spend at least one night in Venice, but not every vacation has time for that, we completely understand so we’ll try our best to compose a tour for you, in which you can explore Venice in just 12 hours. Venice is located in the Veneto region in Italy, on the Adriatic Sea, formed from a staggering 118 islands that are a home to over a quarter of a million people. The historical center itself and what we call today the main island is home to just around 55.000 people. It’s known as the most magical island in the world with nicknames like: Serenissima, city of the mask or the floating city. With an average of 30 million visitors per year, it’s a must to plan your trip to Venice accordingly, especially if you only have a day to spare.

St. Mark Square
St. Mark Square is one of the most important and most recognizable squares in all of Italy, its known for its beauty and renaissance architecture. Just around the corner, visitors can spot the spectacular St. marks Basilica, however if you’re planning on going inside the basilica, make sure to get tickets online prior to arriving, as you’ll most likely spend your time waiting in line and with so little on your schedule, you don’t want to be doing that.

Doge’s Palace
On the right hand side of St. Mark Basilica you’ll find the Doge’s Palace, inside you’ll see THE GIANT’s staircase, the grand staircase leads up through the main floor and inside the palace. It not only gets its name for its shire size, but also because on the top staircase, it’s flanked by statues of two ancient Roman Gods, Mars and Neptun.

Clock Tower
The Clock tower has been keeping time in Venice for over 500 years and it was built in the late 15th century, this special clock displays the time, the phase of the moon and the sign of the zodiac. The clock tower is topped by two bronze figures who strike the bell airily. The Venetian Legends tells that when the clock was revealed to the Doge, he was so astonished by its beauty and well refined elegance, he had the designer blinded, so he could never recreate something so beautiful.

Bell Tower
If you are a lover of great views, definitely check out the Campanile or in other words known as the Bell Tower, rising tall 99 meters, visitors can climb up it and see all across Venice and its lagoons. The tower is only open from April to October, so plan your visit well, if you are looking to take a great photo.

Liberia Acqua Alta
This place often flies under the radar and is not among the most popular destinations in Venice, but it’s actually pretty interesting. The name translate to the library of high water, most of the books are protected inside bathtubs or even a gondola as it’s the best way to protect the books , due to the constant flooding of the canals. 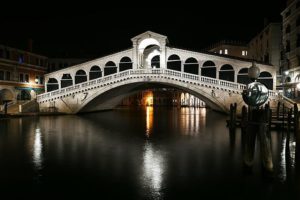 Rialto Bridge
Rialto Bridge is among the most recognized and visited attractions in Europe, let alone Venice. It was actually first built as a pontoon bridge in the twelfth century, later they rebuilt it out of wood but it burned down a few times and collapsed on a few occasions, until it was finally completed in 1591.

Jewish Ghetto
The Jewish ghetto is the oldest ghetto in the world and it was created here in 1516, the word “ghetto” literary derives from this area, the new ghetto or otherwise known as the Ghetto Novo, is the oldest part of it and it’s actually a small island within Venice, connected by draw bridges on two sides. Both bridges used to be lifted up every night at midnight, to keep the area safe and prevent women from coming home late.